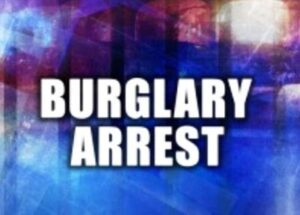 On October 6, 2021 at approximately 1:30 a.m. Deputy Adam McGilton responded to a Residential Burglary on South David Street in Harrell. Upon arrival he made contact with the homeowner. The homeowner stated that around midnight her husband was leaving for work and noticed his car keys missing. After checking the other vehicles, he noticed multiple other items missing as well including two firearms. After checking the homeowner’s security cameras, the suspect was identified as Russell Fritts. Fritts spent approximately 50 minutes at the home that night taking items from outside the home, vehicles and inside the storage room.

After leaving the residence Deputy McGilton then started on the warrant process when he was dispatched back to residence a few hours later and the homeowner stated that Fritts had returned to her home and was attempting to take more items from her home when she fired 5 rounds from a 22 revolver from a window in the home and Fritts began to flee the scene. Deputy McGilton arrived on scene, shortly after his arrival the Hampton Police Department radioed to dispatch that they had located the suspects vehicle and initiated a traffic stop on the vehicle. Deputy McGilton arrived on scene of the traffic stop and both individuals in the vehicle were identified as Russell Fritts and Bobby Fritts.

The suspects were detained and due to Russell Fritts having an active search waiver on file through Probation and Parole a search of his vehicle was executed and the two stolen firearms were located in the vehicle. Also located in the vehicle were articles of drug paraphernalia and small amounts of methamphetamine.