Attorney Demetria L. Edwards is pleased to formally announce that she is running for Circuit Judge in Division Four of Arkansas’ 10th Judicial District. This Judicial District includes Ashley, Bradley, Chicot, Desha, and Drew counties. This election will be held on May 24, 2022.

Demetria is a native daughter of Southeast Arkansas and a five-generation Arkansan who was born in Dermott and raised in Lake Village, Arkansas. With deep roots in Southeast Arkansas, a commitment to public service, and a respect for the rule of law, Demetria would be honored to serve as the next Circuit Judge in Ashley, Bradley, Chicot, Desha, and Drew counties.

Demetria acknowledges the five generations of her deep roots in Southeast Arkansas as follows:

Demetria’s grandparents are Ella and the late Edward Edwards, Sr. of Lake Village, and the late Margaret and Frankie Lee Gammel, Sr. of Dermott and Montrose.

Demetria’s great grandparents are the late Gussie and Richard Farris of Eudora, Lillie Edwards Newton and Ed Newton of Lake Village, and Amos and Sammie Ella Coleman of Dermott, Arkansas.

Demetria’s great-great grandparents were Sam “Professor” Coleman and Lottie Withers Coleman of Monticello; Laura and Ed Robinson of Eudora; and Joshua and Georgia Allison of Sunshine and Wilmot, Arkansas.

Not only does Attorney Demetria L Edwards have deep roots in Southeast Arkansas, her educational background and legal experiences have also given her the ability to view the legal system from a unique, well-rounded perspective.

Demetria graduated as the valedictorian of Lakeside High School in Lake Village, Arkansas. Demetria is also a summa cum laude, Phi Beta Kappa graduate of Howard University, in Washington, D.C., where she earned a Bachelor of Arts in Political Science. Demetria completed her Doctor of Law degree from the University of Arkansas School of Law in Fayetteville, Arkansas. During her law school studies, Demetria received the honor of attending an International Human Rights Law Program at Oxford University in Oxford, England. As a Christian minister, Demetria has also earned a Masters of Divinity in International Missions from the New Orleans Baptist Theological Seminary. Demetria Edwards has also completed courses towards a Ph.D. in Christian Spirituality.

As an attorney for more than 20 years, Demetria has demonstrated her commitment to public service. Demetria has served as a Judicial Law Clerk and Attorney Advisor for the U.S. Department of Justice in New York City. Attorney Edwards has also served as a Senior and Managing Attorney for Legal Aid of Arkansas, Inc. in Helena-West Helena, West Memphis, and Jonesboro, Arkansas. Additionally, Demetria has served as an Office of Chief Counsel Attorney, during which she represented the Arkansas Department of Human Services in foster care and adult maltreatment cases in Ashley, Bradley, Chicot, Desha, Drew, Lincoln, Jefferson, and Crittenden counties. As a sole practitioner, Attorney Demetria L. Edwards has represented parents in foster cases and provided various types of legal services.

With an early demonstrated commitment to public service, while a student at Howard University, Demetria Edwards had the honor of serving as a Congressional Intern for the late United States Senator Dale Bumpers of Arkansas and United Senator Carol Moseley-Braun of Illinois. Demetria was also selected to serve as a Public Interest Law Fellow for the International Human Rights Law Group in Washington, D.C. At the Human Rights Law Group, Demetria worked on projects connected to the International Criminal Court (ICC) and the United States Convention to End Racial Discrimination (CERD). Additionally, as a LEAD Protégé from Howard University, Demetria served as a legislative intern and student writer for the Leadership Conference on Civil Rights (LCCR) in Washington, D.C.

As an attorney who has represented the state of Arkansas and parents in the foster care system, a minister who has worked as a short-term Chaplain at the Varner Unit of the Arkansas Correctional Institution, and a religious services volunteer at
Dermott’s juvenile detention center, Consolidated Youth Services(CYS) in Colt, Arkansas, Forrest City’s federal prison, and other facilities in Arkansas, New Jersey, and Tennessee, Demetria has observed the criminal justice system from a unique perspective.

Attorney Edwards places great value in seeing the full humanity in all human beings. Demetria has a healthy respect for justice and a conscientious commitment to administering the rule of law. Attorney Demetria L. Edwards is committed to serving as a fair, informed, and honest arbiter of justice who believes in justice for all! She would be honored to receive your vote on May 24, 2022, and serve as the next Circuit Judge of the fourth division of Arkansas’ 10th Judicial District. 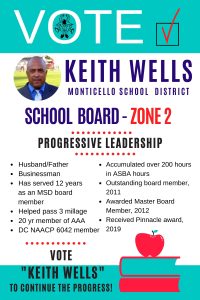 KEITH WELLS OFFICIALLY ANNOUNCES HIS INTENT FOR RE-ELECTION TO THE MONTICELLO SCHOOL BOARD, ZONE 2 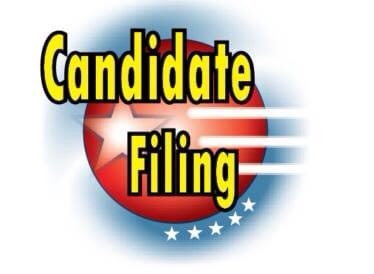