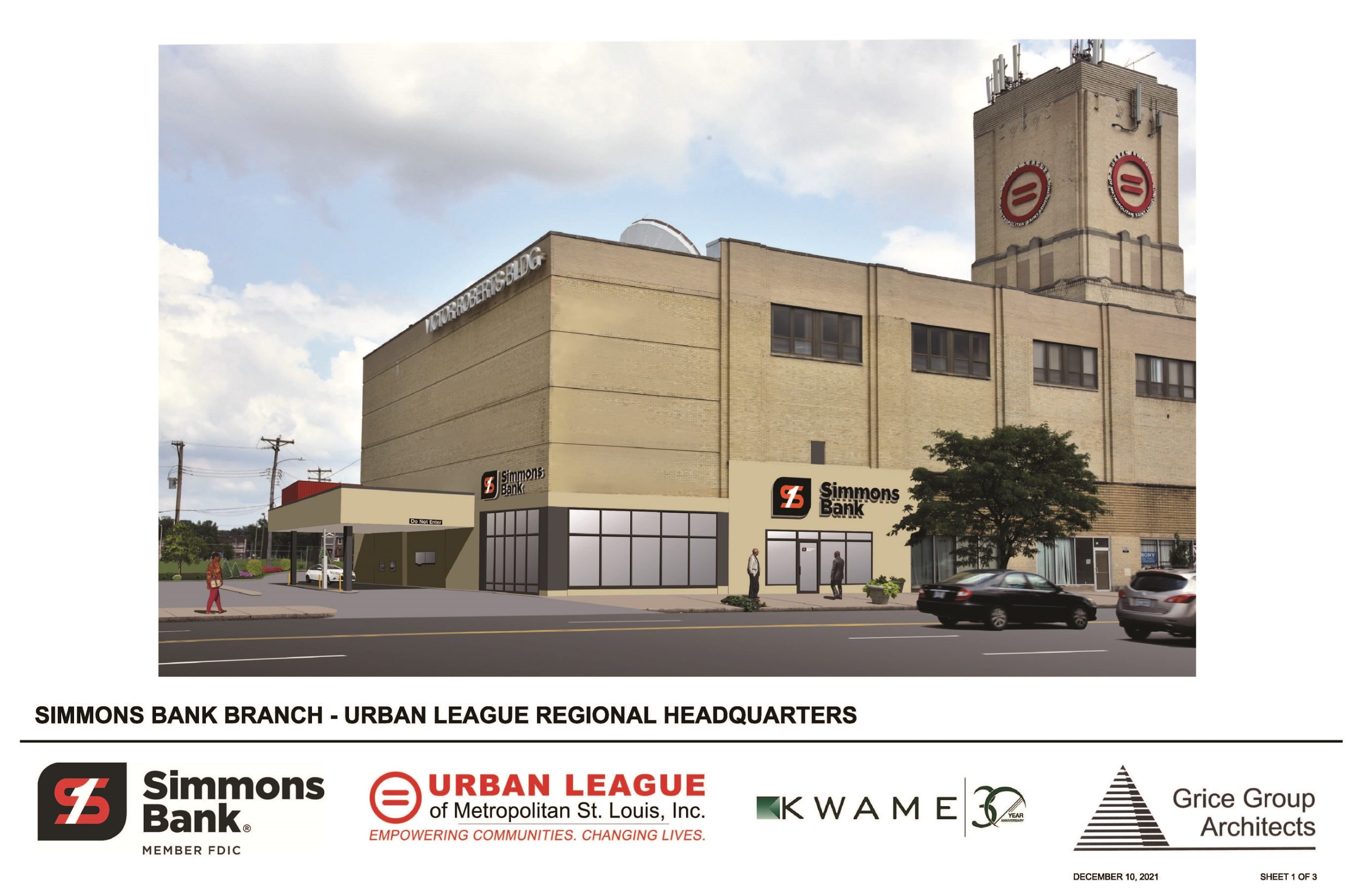 Simmons Bank and the Urban League of Metropolitan Saint Louis, Inc. (ULSTL) announced today the signing of a lease agreement that will establish a new full-service Simmons Bank branch on the first floor at the ULSTL headquarters. Located at 1408 North Kingshighway, construction on the branch is set to begin in early 2022 with completion slated by summer of 2022. The new 2,567 square-foot branch will provide customers access to a full-range of banking products and services designed to help them meet their evolving financial needs and will also include a drive thru banking lane and ATM with after-hours deposit capabilities.

“Simmons Bank is proud to partner with the Urban League of Metropolitan Saint Louis to further support our shared vision of empowering individuals and creating economic opportunity,” said Allan Ivie, president of community affairs for Missouri at Simmons Bank. “The addition of a branch in the Urban League building creates an anchor in the North St. Louis City community that can serve as a catalyst for additional investment and development along the Kingshighway corridor. Simmons Bank will play a key role in these efforts by providing needed depository, lending and other financial services to the community.”

The new branch represents further deepening of the partnership between Simmons Bank and the ULSTL which began in 2019 with a $10,000 donation to support programming at ULSTL. In 2020, the ULSTL purchased their headquarters building 2020 and Simmons Bank assisted in providing financing and, shortly after, approached the ULSTL to discuss the addition of a branch at this location.

“The addition of a Simmons Bank branch represents a sizeable investment in our community,” said Michael P. McMillian, president and CEO of the Urban League of Metropolitan Saint Louis, Inc. “Currently, there is a four mile stretch along Kingshighway from Vandeventer Avenue on the south to Natural Bridge Avenue on the north without a bank branch. This project is a significant step in helping serve the under-banked residents and small businesses of North St. Louis City, especially those along the Kingshighway corridor.”

The new branch will be designed and built by minority-owned businesses Grice Group Architects and KWAME Building Group. Grice Group Architects designed the Centene Ferguson Training Facility in collaboration with ULSTL and Centene Corporation. KWAME Building Group constructed the 13,500 square-foot Community Empowerment Center of Ferguson in partnership with the ULSTL in 2017.

About Simmons Bank
Simmons Bank is a wholly owned subsidiary of Simmons First National Corporation (NASDAQ: SFNC), a Mid-South based financial holding company. Simmons Bank operates over 200 branches in Arkansas, Missouri, Tennessee, Texas, Oklahoma and Kansas. Founded in 1903, Simmons Bank offers comprehensive financial solutions delivered with a client-centric approach. Simmons Bank was named to Forbes magazine’s list of “World’s Best Banks” for the second consecutive year and ranked among the top 30 banks in Forbes’ list of “America’s Best Banks” for 2021. Additional information about Simmons Bank can be found on our website at simmonsbank.com, by following @Simmons_Bank on Twitter or by visiting our newsroom.