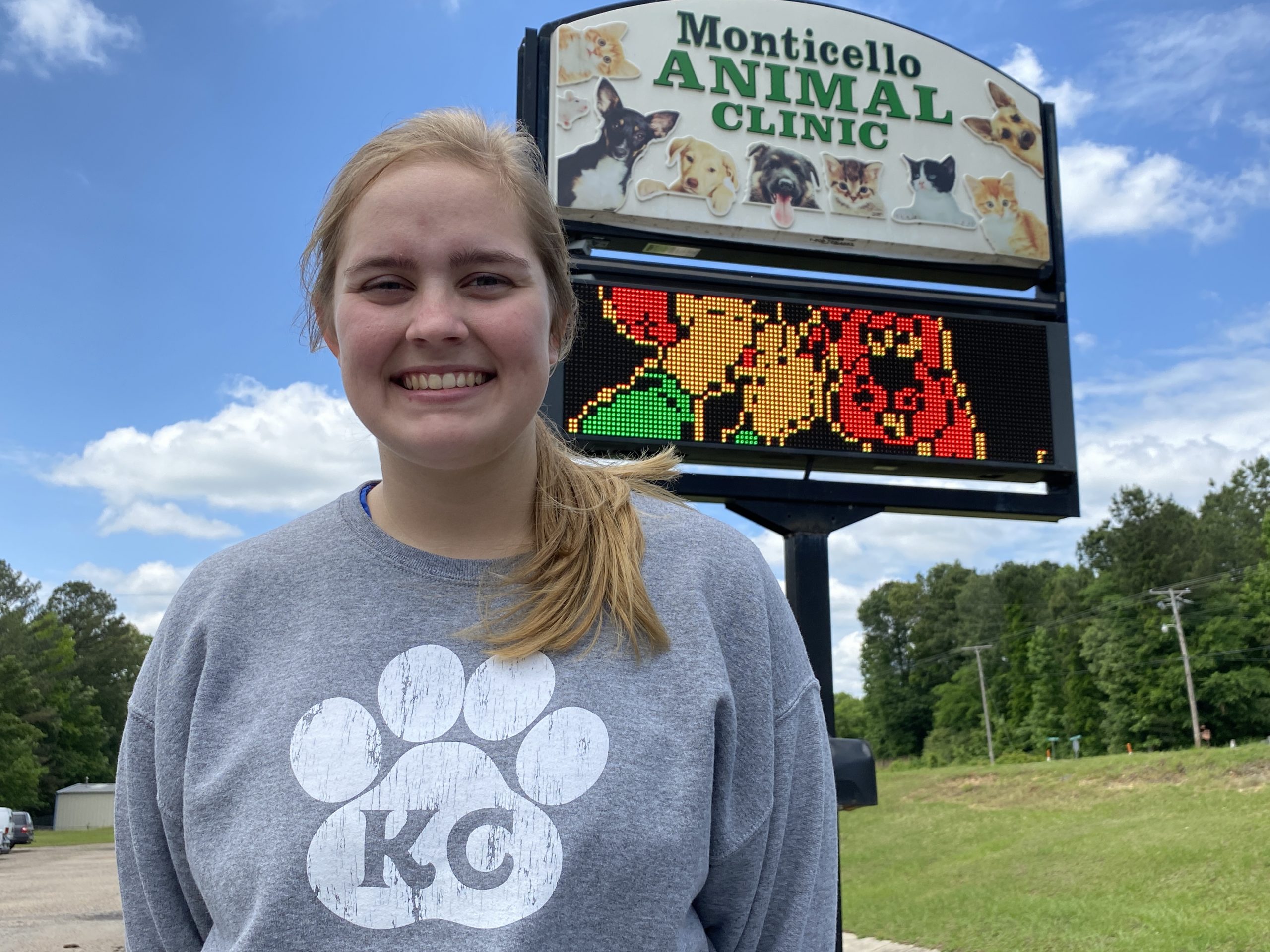 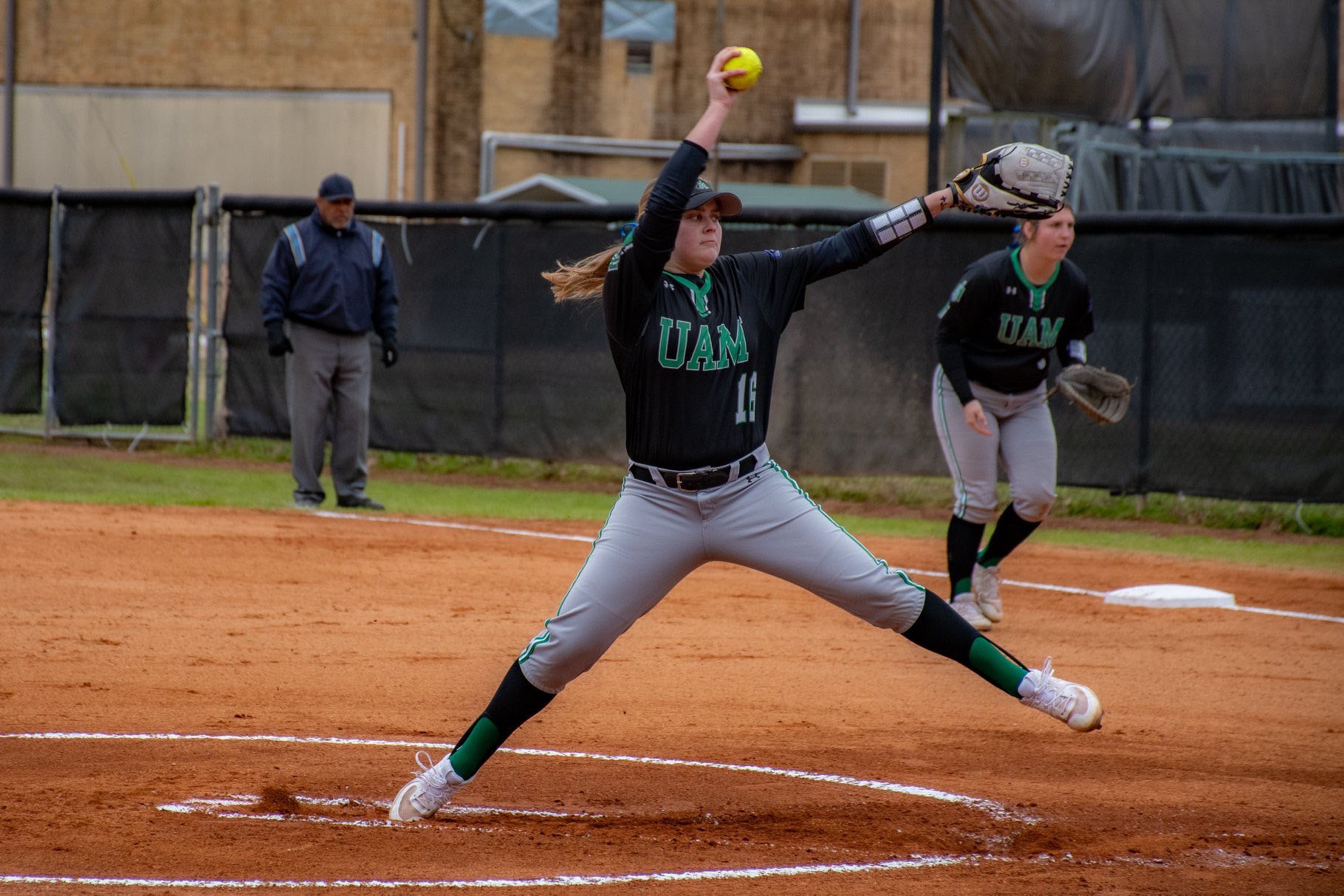 MONTICELLO, Ark. (Lon Tegels) — Hayley McGhee of Olathe, Kansas, may have hit a home run by attending the University of Arkansas at Monticello’s College of Forestry, Agriculture, and Natural Resources — but not before laying down a sacrifice bunt.

The Olathe native came to UAM on a softball scholarship and with an eye to becoming a veterinarian. Despite being starting pitcher, she quit the team her senior year to focus on getting into veterinarian school. The move paid off; this month, she was accepted into a veterinary school in Missouri.

Conflicting paths
It didn’t take long before her academic and athletic paths came into conflict and the animal science major knew she had to make a decision. McGhee found herself getting up at 5 a.m. while on the road for a softball game in Oklahoma — not prepping for the softball game but instead studying for one of her pre-vet classes. She found that travel for the softball team, commitment to practice, and lack of study time was adding up to “C’s,” which were not going to get her into vet school.

“I had doubts as to whether I could do it or not, but between my sophomore and junior years is when I really made the decision, this is what I’m going to do,” McGhee said. “I will do what I can to get into the first cycle and get the experience I need. It just so happens my senior year I had to decide on whether to remain to play softball or get into a vet clinic and get more experience and focus on my grades.”

Tough year
During her junior year, McGhee said she took organic chemistry I and II and biology, a combination which made for a tough year.
“Biochemistry and microbiology during my senior year were the determining factors in deciding whether I should keep playing softball and watch my grades slightly suffer or stop playing softball and try and get into a clinic,” she said.

Sacrifice paid off
McGhee graduated from the College of Forestry, Agriculture, and Natural Resources in May as the only pre-vet graduate at UAM this year. This fall, she starts classes at the Missouri College of Veterinary Medicine in Columbia.

In the meantime, she is finishing her job with the Monticello Animal Clinic, where she works as a vet tech assistant. McGhee says the hands-on experience at the clinic may have been the deciding factor in getting into vet school. There, she does blood work, gives vaccinations, lays out medications and cleans cages, and handles daily housekeeping chores. McGhee says the clinical experience in handling animals was every bit as valuable as getting good grades. She says the only thing she hasn’t gotten to do at the clinic is take part in animal surgeries.

Lindsey a mentor
Rocky Lindsey, a veterinarian and assistant professor of animal science at UAM, was impressed with McGhee’s determination. McGhee is the first student to attend his classes in all four years.

“She was a freshman coming from Kanas to play softball. My first impression was that she is never going to make it,” he said. “She stepped away from home and was a quiet kid.”

However, his impression changed over the years.

“When Hayley decided to step away from softball to focus on getting more experience in the field, that was a very brave move in my mind,” Lindsey said. Softball “is why she came to this college.

“Hayley holds a special place with me because she is the first one who has been with me from the start.” Lindsey said.

Lindsey said the pre-vet curriculum at UAM is difficult. Many animal science classes coincide with pre-vet requirements that are junior and senior-level classes. The pre-vet student usually averages 17 to 18 credit hours per semester instead of the typical animal science major at 15 hours.

“If you do take the pre-vet emphasis, then you’re going to spend a lot of time in the sciences building because there are a lot of courses you’ll need to take such as organic chemistry, physics I, and II, in addition to the normal requirements of an animal science degree,” Lindsey said.

Lindsey said that getting accepted into veterinary school is an accomplishment because it is highly competitive.

“If you don’t have the grades, you’re not going to get into veterinary school,” said Lindsay. “After you get the grades, then there is another cut.”

Lindsey said hands-on experience outside the classroom is critical.

“At UAM, we focus our students on large animal work. Large animal work is unique to a lot of students applying to vet school,” he said. “We get them comfortable with cattle and the horses from the rodeo team. Each year students learn how to worm and vaccinate cattle.”

Pursuing the dream — a work in progress
McGhee said as a child, she wanted to be a marine biologist. Her family would go to the beach during the summers, and she fell in love with the ocean. Later, McGhee shifted her ambitions to make a bigger impact. Becoming a veterinarian opens that door, she said.