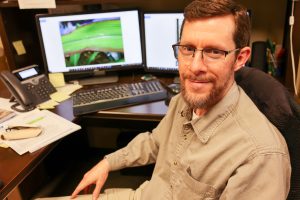 The University of Arkansas at Monticello

• Babst et al. discovered that plants have a previously unknown ‘backup strategy to maintain sap flow
• Discovery powered by new non-destructive techniques
• Discovery could lead to the breeding of plants with added resilience
• This new understanding of phloem flow has implications for breeding and engineering

Discovery that plants have a backup plan to move sap even without the presence of sugar — once thought impossible — is the result of a decade-long study published in the February 21 issue of “Nature Plants. “ The multinational research team behind the discovery includes lead author Benjamin Babst, a scientist from the Arkansas Forest Resources Center, and the College of Forestry, Agriculture and Natural Resources at the University of Arkansas at Monticello.

“Nature,” established in 1869, is among the most highly regarded journals in science. In its 126-year history, Nature has grown dozens of high-impact offshoot journals, including “Nature Plants. “

“What we found is quite a surprise, “ said Babst, associate professor of plant ecophysiology, “Sugar loading is not required for phloem sap flow in maize plants. “

The research team looked at how plants move the sugars they manufacture through photosynthesis from the leaves to the stem, roots, seeds, and fruits. Those sugars are moved through the phloem, tube-like structures running from leaves to other plant parts.

“Plant biologists have been taught for decades what Ernst Münch first proposed in the 1930s — that sap flow is driven by pumping sugars — typically sucrose — into the phloem“,“Babst said. “The high concentration of sucrose causes water to move in. Water movement into the phloem generates pressure, and the pressure causes the sap to flow down through the phloem toward the stem and roots.

“Under normal circumstances, that appears to be true,” he said. Babst and his colleagues wondered what happens when a plant cannot pump sugars into the phloem, for example, when the plant is under stress from drought, flood or heat or cold.

The team found the plant still has different ways to achieve sap flow by using potassium and other ions to drive osmotic movement.

Members of the research team tackled different aspects of the problem, which included finding a key mutation and inventing new ways to measure flow within plant tissues.

Babst worked in partnership with David Braun of the University of Missouri, who isolated a corn mutation that prevents the plant from pumping sucrose into the phloem, but still had sap flowing at normal speeds.

Michael Knoblauch of Washington State University found that phloem pressure was high in the mutant maize, similar to wild–type maize.

Researchers found that “other dissolved molecules, solutes, should cause similar behavior of water,“ Babst said. “Sugars are usually the most abundant molecule by far in the phloem, but there is also a lot of potassium“ found in the mutant corn.

New techniques gave accurate measurements that enabled Kaare Jensen, of the Technical University of Denmark, to model liquid flow. Babst said, “The modeling told us that the increase in potassium was enough to maintain phloem pressure and phloem sap flow at the levels we measured in the mutant plants.“

“This paper was the culmination of the right mutant and several new non–destructive techniques being used together,“he said. “Phloem is very difficult to study. Because it is very small and buried inside of other tissues, it is easy to damage or disrupt the phloem when trying to do physical measurements. Progress on understanding how phloem works has been slow because of these major technical difficulties“.“

Of isotopes and insects

Researchers turned to medicine and entomology for the innovative and non-destructive, and minimally invasive techniques used in this study.

“”We used carbon–11 radioisotope to measure phloem sap flow in live plants – it‘s one of the isotopes used in medical imaging“,“ Babst said.

Gertrud Lohaus of the University of Wuppertal in Germanymeasured minute amounts of phloem sap using a technique called aphid stylectomy.

“”The technique relies on sap-sucking insects, aphids, to find the phloem with their straw-like mouthpart, the stylet“,“ Babst said.

Babst and another team member, Ryan Tappero at Brookhaven National Laboratory, used X-ray fluorescence to image and measure potassium in cross-sections of phloem. Sönke Scherzer and Rainer Hedrich, both of the University of Würzburg in Germany, used another technique to measure potassium in live phloem by inserting special microelectrodes into individual phloem cells of corn plants.

The knowledge gained from this research could help plant breeders develop crops with greater hardiness under climate extremes. Also, the suite of techniques developed for this research can be applied to other plant species and could aid research in enhancing crop yields or wood production.

“I approach my work with the idea that if we can understand basic plant function, we can improve plants through breeding and develop better management strategies, whether that’s for forestry or agriculture,“ said Babst.

The breadth of quantitative analysis that was performed in one study system and the level of modeling allowed is unique. Babst said, “this is why this research represents a big step forward in understanding how phloem transport works.”

This study was supported in part by the United States Department of Energy, Office of Biological and Environmental Research [under contract DE-AC02–98CH10886], by a Goldhaber Distinguished Fellowship from Brookhaven National Laboratory, and by the United States Department of Agriculture, National Institute of Food and Agriculture, McEntire-Stennis project number 1009319. Other funding consisted of US National Science Foundation Plant Genome Research Program grant (IOS-1025976) to DMB, and a research grant (13166) from Villum Fonden to KHJ, and a DFG grant to RH and SS (SCHE 2148/1-1). This research used the X27A Beamline of the National Synchrotron Light Source, a US Department of Energy (DOE) Office of Science User Facility operated for the DOE Office of Science by Brookhaven National Laboratory under Contract No. DE- AC02-98CH10886.

The University of Arkansas System Division of Agriculture‘s mission is to strengthen agriculture, communities, and families by connecting trusted research to adopt best practices. Through the Agricultural Experiment Station and the Cooperative Extension Service, the Division of Agriculture conducts research and extension work within the nation‘s historic land grant education system.

The University of Arkansas System Division of Agriculture offers all its Extension and Research programs and services without regard to race, color, sex, gender identity, sexual orientation, national origin, religion, age, disability, marital or veteran status, genetic information, or any other legally protected status. It is an Affirmative Action/Equal Opportunity Employer.