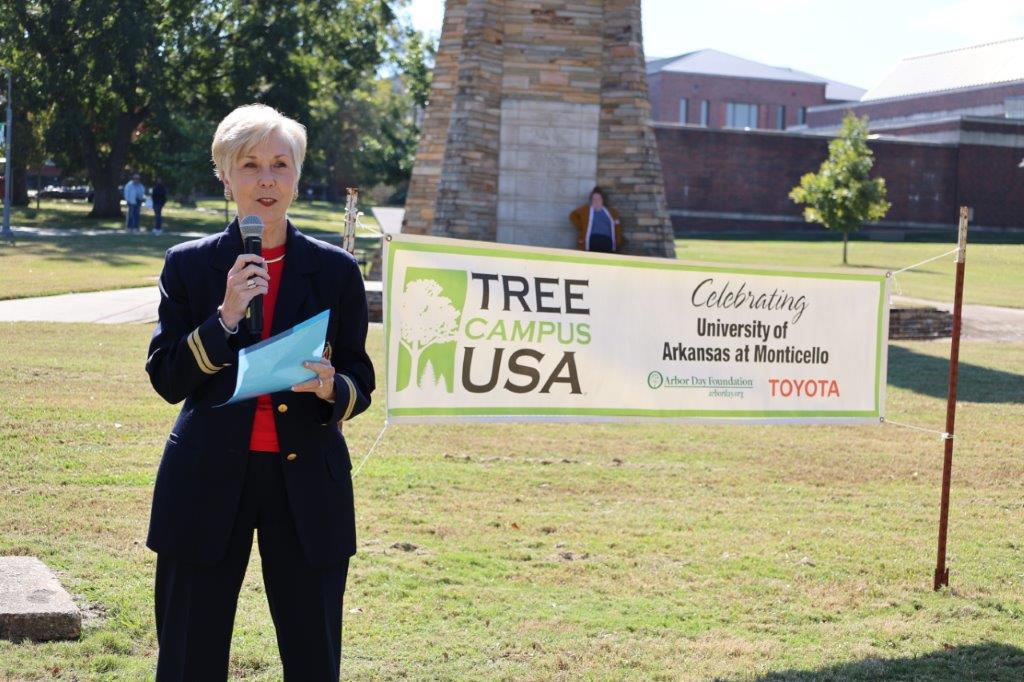 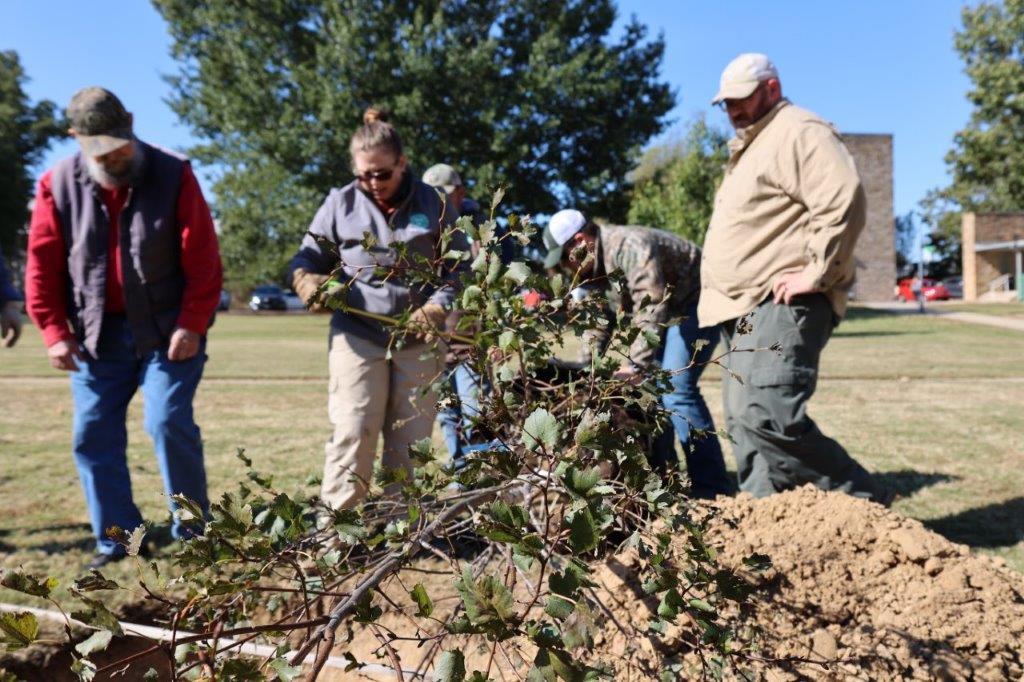 MONTICELLO, Arkansas — The University of Arkansas at Monticello recognizes the importance of a tree. UAM is home to the state‘s only college forestry program, and much of southeast Arkansas‘ economy is dependent on the forest and timber industry, according to _______.

That‘s why it should come as no surprise that the UAM campus is a Tree Campus USA recognized campus.

To maintain the Tree Campus USA status and in conjunction with Arbor Day 2021, the University took a few moments Friday to plant a tree. The Greenspire Linden tree was donated by the Arkansas State Division of Forestry, which also provided the manpower to get the potted tree lifted off the truck and rolled into its permanent site near the campus clock tower.

UAM associate professor of History Dr. John Henris hosted the event. Henris said, “The reason we are celebrating this fall instead of the spring, which is more traditional, is that the pandemic threw off our Arbor Day celebrations here at UAM the last two seasons.“ Henris said, “So we celebrated it this fall to get back on track. The tree planting allows us to maintain a Tree Campus USA status.“

Henris said The Tree Campus USA designation, which UAM has maintained since 2010, makes UAM the oldest established university campus in the state to maintain that title. Henris said, UAM also has the state of Arkansas‘ only forestry program, so it fits with the University’s mission,“ said Hendris.

UAM Chancellor Peggy Doss kicked off the planting recognition by reading a proclamation celebrating the contributions of trees about health and the economy. She also mentioned clean air, wildlife, recreation, and wood products as tree contributions. Doss wrapped her proclamation, talking about how trees offer a sense of pride to the campus.

Two volunteer students were chosen to provide information about the history of Arbor Day. Third–year accounting student Anna Lynn spoke on how Arbor Day began in Nebraska in the 1870s to help beautify the Great Plains. First–year accounting student Lexi Ruth Freeman spoke on how trees produce renewable resources and fuels for our home, in addition to beautifying the campus.

UAM Dean of the College of Forestry, Agriculture and Natural Resources said trees are more than just aesthetic. “CO2 concentration in the atmosphere is increasing, Blazier said.Trees are offsetting that threat. Because of how long–lived treesare, there is as much mass above ground as below ground. Trees are taking CO2 from the atmosphere and converting it into woody biomass that is stored for a long time.“ Said Blaizer.

Blazier said, “when those trees are felled and are turned into structural timber, those structures will last a long time as well.“Blazier added that‘s trees are seen as great assets in terms of storing the extra carbon dioxide from the atmosphere.

While Covid–19 delayed April‘s Arbor Day event, Blazier said planting late in the fall is common in the south. He said it‘sbetter for the health of the tree.

“In the South, the climate is such that by April, it is too warm to put a new tree in the ground; it‘s stressful to move them and plant them at that time,“ he said. “So we‘re able to plant them in fall through the winter months. The best time of the year is from late October to February. Optimum months are December and January while the trees‘ roots systems are dormant,“ Blazier said. “They can be excavated with less stress before the spring heating begins.“

Retired UAM Forestry Professor Lynne Thompson took an active role in prepping the tree for Friday‘s planting. Just like his days in the classroom, he gave instructions on how big the hole should be and shared some statistics about UAM‘s trees with the small gathering. He said there are 1,238 trees on campus. Water Oak dominates the species with 84 trees at 7%.

County Forester Tabitha Holloway was also instrumental in getting the tree into the ground. Before she planted the Greenspire Linden, she asked the audience several trivia questions about the species. If the person attempted to answer, they were most likely to get a forestry book.

According to Henris, UAM plans to return to its normal Arbor Day Celebration in April 2022, when another species of tree will be planted.

Henris thinks being on a tree campus is something UAM students should relish. “It demonstrates that we are invested in campus beautifications, making this place a better place to work and to study.“

The University of Arkansas System Division of Agriculture‘s mission is to strengthen agriculture, communities, and families by connecting trusted research to the adoption of best practices. Through the Agricultural Experiment Station and the Cooperative Extension Service, the Division of Agriculture conducts research and extension work within the nation‘s historic land grant education system.