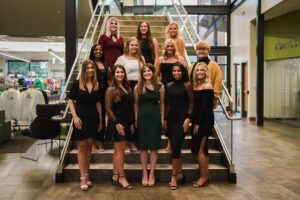 MONTICELLO, AR — Twelve students have been selected to the 2021 homecoming court at the University of Arkansas at Monticello.

The court will be introduced during a pregame ceremony at the homecoming football game Saturday, October 16, at Convoy Leslie-Cotton Boll Stadium. UAM kicks off against Ouachita Baptist University at 2 p.m. The homecoming queen, chosen by a student body vote, will be crowned at the ceremony’s conclusion.

J‘Naya Brown of Rison, AR, a senior exercise science major and the daughter of Diana Lewis and Darrin Brown. J’Naya is the president of The Sigma Phi Chapter of Delta Sigma Theta Sorority, Incorporated, and a student trainer for UAM Athletics. J’Naya was nominated by The Rho Mu Chapter of Omega Psi Phi Fraternity, Incorporated.

Haley Mims-Crawford of Conway, AR, a senior communications major and the daughter of Nicole Mims and Jeff Crawford. Haley is a member of the UAM Cheer team, the UAM Debate team, a student coordinator for TedX UAMonticello, and a peer tutor in the Office of Career, Testing andTutoring. Haley was nominated by Alpha Phi Alpha Fraternity, Incorporated, Pi Psi Chapter.

Jamie Lynn Franks of Fort Worth, TX, a senior business,marketing, and business management major and the daughter of James and Michelle Franks. Jamie is a member of the UAM softball team and the vice president of Phi Beta Lambda. Jamie was nominated by Phi Beta Lambda.

Hadley Joye Lewis of Texarkana, AR, a junior music education major and the daughter of Norvel and Lisa Lewis. Hadley is the vice president of membership education for Kappa Kappa Psi and is a member of the UAM jazz band, marching band, wind symphony and percussion ensembles. Kappa Kappa Psi nominated Hadley.

Mikayla McGregor of Monticello, AR, a senior nursing major and the daughter of Mike and Shelly McGregor. Mikayla is the president of the Student Nurses Association, a Miracle League volunteer, and a member of the School of Nursing Admissions Committee, Biology Club, the Baptist Collegiate Ministry, the Missionary Baptist Student Fellowship, and is a participant in intramurals. The Student Nurses Association nominated Mikayla.

Rebecca Nichols of Monticello, AR, a junior exercise science major and the daughter of Allen and Season Nichols. Rebecca is the secretary of the UAM Ambassadors, a student worker in the Office of Admissions, and is a member of the Baptist Collegiate Ministry, the Missionary Baptist Student Fellowship, and International Club. Rebecca was nominated by the International Club.

Lauren Grace Taylor of Grapevine, AR, a senior biology, biochemistry and psychology major, and the daughter of Lynn and Vonda Taylor. Lauren is the vice president of both the Biology Club and Sigma Zeta, is a resident assistant in the Office of Residence Life, and is a member of UAM Ambassadors, Baptist Collegiate Ministry and Missionary Baptist Student Fellowship. Biology Club nominated Lauren.

Rylan White of Star City, AR, a senior business management major and the daughter of Kevin and Brandy White. Rylan is the treasurer for both Alpha Sigma Alpha and Phi Beta Lambda and is a member of the UAM Ambassadors and Missionary Baptist Student Fellowship. Rylan was nominated by UAM Ambassadors.