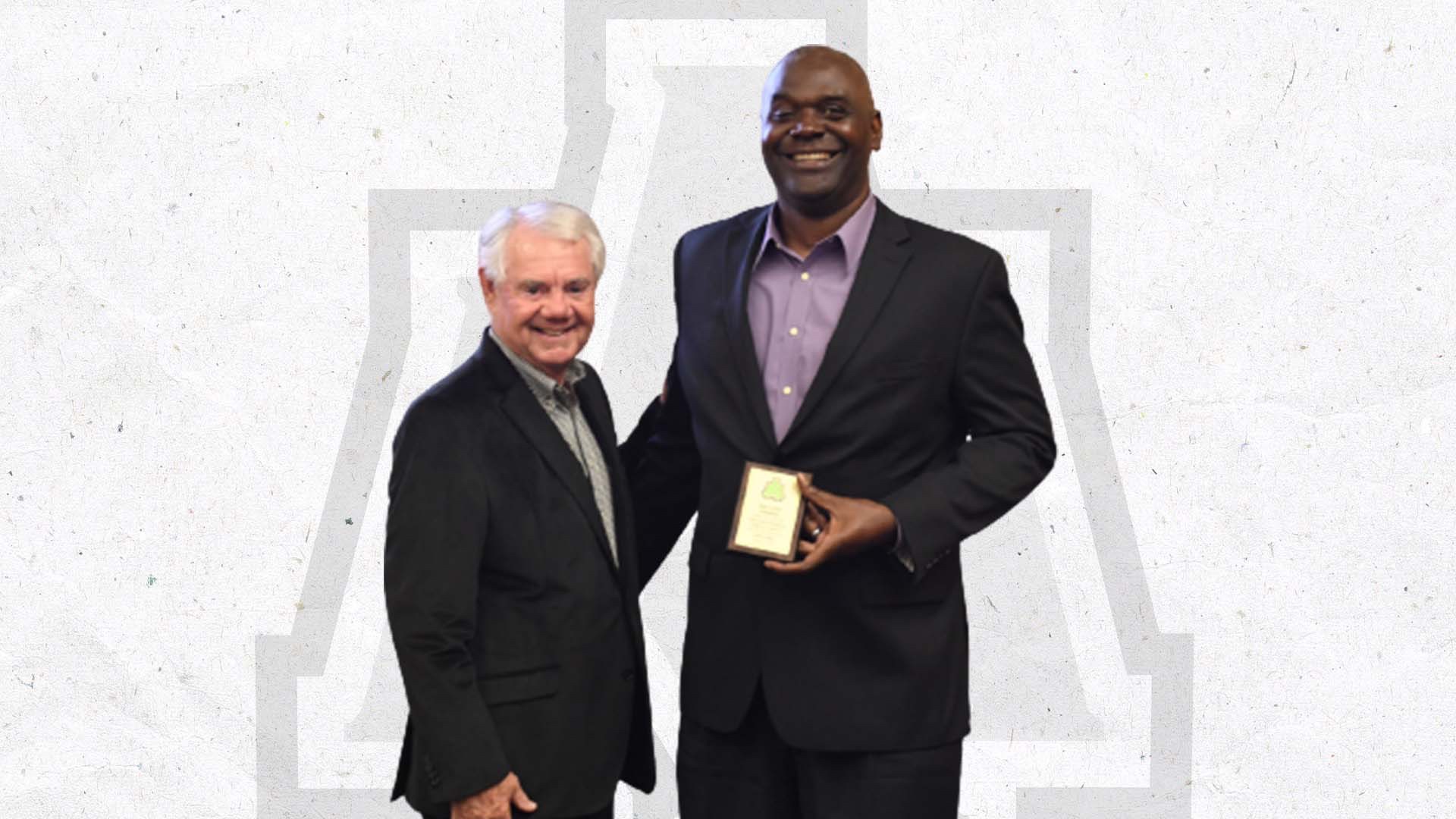 MONTICELLO, Ark. – The University of Arkansas at Monticello welcomed six new members, and two athletic teams to its Athletic Hall of Fame with its banquet this evening. The six new inductees include Kevin Craft (’00), John Tatum (’81), Jerry Bingham (’80), Julie Bowen (’02), Art Kaufman (’80), and Corey Wood (’16), while the two UAM athletic teams are the 1985-86 Men’s Basketball Team & 2010 UAM Softball Team. With these new members, the Hall of Fame includes 98 memorable athletes and four teams.

UAM also recognized the Spirit Award Recipients from the past two years – Grant and Gay Pace (2020) and Tim and Roxanne Smith (2021).

The first of the new inductees, Kevin Craft (’00), played football for the Weevils from 1997-2000 as UAM’s kicker. Upon graduation in 2000, he was the all-time point scorer and held 18 of 21 kicking records. Craft is the all-time leader in field goals attempted (51), field goals made (37), field goal percentage (.725), extra points attempted (105), extra points made (100), is second in kick scoring (205), and is currently fourth on UAM’s all-time list in total points scored. Along with his accolades on the field, he served as the Treasury of the Student Government Association for the 1998-99 school year.

After graduating from UAM, Craft received his MBA from the University of Central Arkansas and became partner at a firm in Maumelle, Arkansas. He served his community there for 15 years. The former UAM standout is now a successful small business owner in Guthrie, Oklahoma, and one of the highest producing State Farm agents in his territory. Craft volunteers with the local YMCA, including winning the award for Volunteer of the Year. He also earned an award for Small Business of the Year in his town. Continuing to give back to his community, Craft serves on the boards of the YMCA, Rotary, and the local Chamber of Commerce. He has coached soccer and has a passion for sharing his love of sports with the youth of today.

John Tatum (’81) played football for the Weevils from 1976-81. After suffering an injury his first year on campus, he returned and immediately made an impact as one of the best defensive ends in the conference. A player with great speed and talent, opponents were fearful of running the ball to Tatum’s side of the field. Perhaps one of his most impressive plays was against UAM rival – Southern Arkansas University – during the 1978 season. One of the few times a team decided to run a ball on John’s side of the field, did not go well for the opponent as the UAM alumni forced a fumble, recovered it, and returned it 98 yards for the touchdown.

Tatum made a change his senior year in 1979 to anchor the defense as the team’s middle linebacker. His tough play and awareness helped lead the Boll Weevils to the 1979 AIC Championship. For his individual efforts, he was All-AIC and First Team NAIA All-District 17. He was named the 1979 UAM Football Black Athlete of the Year in 1979 & 1980, and the 1981 Outstanding Academic Achievement Award Recipient. Tatum was drafted by the Dallas Cowboys, but an unfortunate health matter prohibited him from playing.

Tatum was the second African American to graduate from UAM’s School of Forestry and has had an incredible professional career at International Paper.

Jerry Bingham (’80) played football for the Weevils from 1976-1980. Bingham made an impact on the gridiron for UAM with tough rushing, great speed, and the ever-looming possibility of a big play. He still holds a tie for the longest run play in team history with a 98-yard touchdown run against Southern Arkansas University in 1978. Bingham still holds the second-best single-game rushing performance at UAM after posting 261 rushing yards and four touchdowns. His four touchdowns in that game sits as a tie for points scored (24) by a junior and the third most in a single game by a Weevil.

As a member of the 1979 AIC Championship team, Bingham played a more prominent role as a ball carrier as he lead the Weevils in rushing that season with 1,019 yards. Bingham’s ground performance during the 1979 season still ranks in the top-10 in program history for rushing yards in a season at UAM. Big games were the usual for Bingham as he ranks eighth all-time for the Weevils in 100-yard rushing games with eight in his career. He also found the end zone 16 times during the championship run, which puts him third among scoring leaders for a single season with 96 points. Bingham matched his previous high for points scored in a single game (24) with another four touchdown performance in 1979 against Harding University.

Art Kaufman (’80) Kaufman played football for UAM from 1976-1980. Kaufman was a leader for the Weevil defense as a linebacker during his entire career at UAM. He is one of the only four-year starters in school history. Kaufman’s named is etched in the record books for the Weevils as the second-leading tackler in program history with 543 career tackles (321 solo, 222 assists).

As a leader on the defense for the 1979 AIC Championship team, Kaufman earned First Team All-NAIA District 17 and First Team All-Arkansas Intercollegiate Conference honors. Kaufman finished his career at UAM with two All-American nods and three consecutive seasons with more than 100 tackles, which all rank in the top 10 in Weevil history for a single season (1979 – 147 tackles, 1978 – 145 tackles, 1977 – 136 tackles.)

After graduating from UAM, Kaufman went on to have a 35-year coaching career in college football. He started coaching at Ole Miss as the linebackers and defensive ends coach. While with the Rebels, the team made appearances in the 1989 Liberty Bowl and 1991 Gator Bowl. Under his tenure, Kaufman helped Ole Miss appear in four straight bowl games from 1997 to 2000. In 1999, Kaufman’s defense ranked fourth nationally in rushing defense. The UAM alumni moved to the University of North Carolina as the Defensive Coordinator in 2009 where he finished as a finalist for the Broyles Award, which is given to the top assistant in college football. Kaufman’s most impressive years came as the Defensive Coordinator at Texas Tech where he took a defense that ranked 114 out of 120 in total defense to No. 4 in the country in total yards allowed in 2012.

Corey Wood (’16) played baseball for the Weevils from 2014-2016. Upon graduation in 2016, he held the program record for career home runs with 35. Wood is still the record holder for home runs (26), runs scored (65), and RBI’s (90) in a single season and ranks in the top five in program history in hits (79) and doubles (19). In his stellar 2016 season, Wood set the school record for home runs, RBI’s, runs scored, total bases, and slugging percentage en route to winning the Josh Willingham Award, which is given to the NCAA Division II Most Valuable Player. Among his other accolades on the field, Wood earned consensus All-American and All-Region honors, All-GAC First Team, GAC Player of the Year, and MVP honors for both the GAC Championship Tournament & NCAA Division II Central Region Tournament. Wood was also named to the GAC All-Decade Team. UAM named Wood the Male Athlete of the Year in 2016.

The 1985-86 UAM Men’s Basketball Team is one of the best teams in UAM history. Finishing the season with a 26-10 overall record and 15-5 conference mark, the Boll Weevils made a historic run ending the year as NAIA National Runners-Up. The Weevils’ 26 wins still remain the most in a single season for UAM.

The Boll Weevils were also NAIA District 17 Champions as UAM won 13 of their last 14 games of the year. They defeated Henderson State University and Hendrix University in the early rounds of the District 17 Tournament, which set up a showdown against Scottie Pippen and the University of Central Arkansas in the Championship Game. The championship game lived up to the hype as UAM defeated UCA in an overtime thriller, 55-51.

From there, the Weevils continued their historic run in the National Tournament as they defeated Briar Cliff, Wayland Baptist University, the College of Charleston and a team led by Dennis Rodman in Southeastern Oklahoma to advance to the NAIA Championship Game. The run came to an end in the championship game as Lipscomb edged the Weevils, 67-54.

The 2010 UAM Softball Team is one of the most highly decorated teams in UAM history. A team full of tremendous talent, this Blossom roster went on to be NCAA South Regional Finalists and ended the year ranked No. 11 in the National Fastpitch Coaches Association’s Top-25 Poll. They were also Gulf South West Champions and ended the 2010 campaign with a 55-13 overall record.

The Team had a tremendous amount of individual accolades as well. They were led by four All-Americans – Becca Tipton, Kayla Jackson, Emilee Hobbs, and Sarah Hayslip.

Grant and Gay Pace are the recipients of the 2020 UAM Spirit Award. The Pace’s are regulars at all UAM athletic events. Gay is a long-time UAM employee and currently serves as the Director of Procurement Services while Grant co-owns Regions Forest Services, LLP and Weevil Fan Rentals in Monticello with Gay.

Gay and Grant have been attending games since the early 1980’s and have tailgated since the first official tailgate at UAM. They love to tailgate, and feed the teams, staff, & coaches. For them, UAM is home. Gay started college at Northeast Louisiana University, but eventually came home to UAM, while Grant attended UAM and worked in the Forestry Department under Dr. Boris Zeide. They take pride in the fact that they have established relationships with students, their families, and coaches that extend past their UAM years.

The Pace’s are frequent attendees at UAM events and championships to this day, making their way across the Great American Conference for many years. Traveling to games in the state of Arkansas and beyond has become second nature for them.

Tim and Roxanne Smith are the recipients of the 2021 UAM Spirit Award. The Smith’s are regulars at all UAM athletic events. They are both UAM graduates as both received a degree in accounting in 1991.

Tim and Roxanne love to attend all of the different sporting events UAM has to offer and enjoy supporting each of the different sports. The Smith’s have a passion for getting to know the UAM players, coaches, and staff. They love to support the Weevils and Blossoms on and off the field in any way they can including feeding all of the separate teams any time they get the chance. Tim said it best when it comes to building relationships with the student-athletes, “The way to an athlete’s heart is food.”