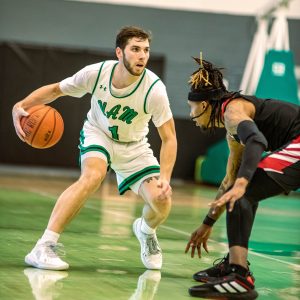 The University of Arkansas at Monticello Men’s basketball team fell in a make up Great American Conference match-up against Northwest Oklahoma State University on Monday, 71-55.

The first half started with the Rangers being the first to score in the match, UAM would tie the match up and continue to keep the score close for most of the half. The Ranger defense proved to be a force as they stopped any momentum that Monticello had. The Weevils were able to put up 28 points throughout the entirety, they still trailed Northwestern Oklahoma 36-28 as the two teams would head into the locker room.

The second half proved to go the Rangers way as they went back and forth with UAM for the remainder of the game. UAM would only put up 27 points compared to the Ranger’s 35 points. Even with Monticello having given best efforts, they were unable to take back the lead NWOSU had built. UAM finished out the match with a final score of 71-55.

Josh Williams finished as the leading scorer for the Weevils tallying 11 points in the game. Ray Price also contributed a strong amount, giving the Weevils 10 points of his own.

UAM will be back in action Thursday, February, 3rd for a 7:30 p.m. contest as they take on Southern Arkansas University at Steelman Field House